Many months ago, I mentioned the Pinhalense that we were fortunate enough to acquire from a friend the previous summer. Not wanting to do things by half, or indeed fearful of not doing justice to the machine itself, we waitied patiently until a proper space could be made available as its permanent home. 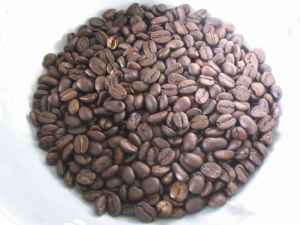 Well the good news is that everything is now up and running thanks to some very kind help from a relative. It’s real seat of the pants roasting and extremely enjoyable. Interestingly, it seems easier to regulate the temperature of roasts with the Pinhalense situated beneath proper ventilation than it did whilst temporarily housed in the same space, though only a couple of roasts took place in that scenario and it could just be a case of becoming more familiar.

Also sorted out now is a proper cooling method for the beans which, although being ‘dumped’ at the correct time, were continuing to roast on despite the best efforts to stunt the roast. We are not fans of spritzing, so a rather ‘Heath Robinson’ contraption was built under the kind direction of TMC’s own roast database wizard ‘GreenBean’ who had already undertaken the process himself.

At a cost of some £65, thirty of which was for an engineering works to drill a single but perfect hole through stainless steel, the resultant finely tuned instrument looks a little like something one might see on a Wallace & Gromit film, but boy oh boy does it work!  The roast is stunted in under ten seconds, ambient temperature is reached in a mere twenty seconds and the beans are cold in around fifty seconds. Superb.

So our grateful  thanks to ‘GreenBean’ and all the gang at TMC, with a special mention for ‘Motoman’ who has also constructed a similar cooler and came up with some excellent ideas.

No doubt there will be more roasting tales over the coming months, but in the meantime the roaster needs a name. So here is the acid test for the blog, I may end up very depressed here if it becomes clear that no-one is reading, so a little competition is in order. A bag of the finest beans we can muster – roasted on said Pinhalense – shall be the prize to the person who comes up with the best name for our two-barrelled, gas-fired friend.

Beans will only be sent to UK addresses, though everyone is welcome to enter. We reserve the right to choose a name other than that which wins the competition, though I can’t see that happening. The closing date is 24th December 2008, the judges decision is final and the winning entry will be announced on New Year’s Day. Good luck!

This entry was posted in Coffee. Bookmark the permalink.

6 responses to “Pinhalense in place … at last! Naming competition …”